News is filtering through that the second round of auctions at the presumed doomed F1 team Marussia has been postponed indefinitely. Multiple sources have posted the following notice from the Administrators: 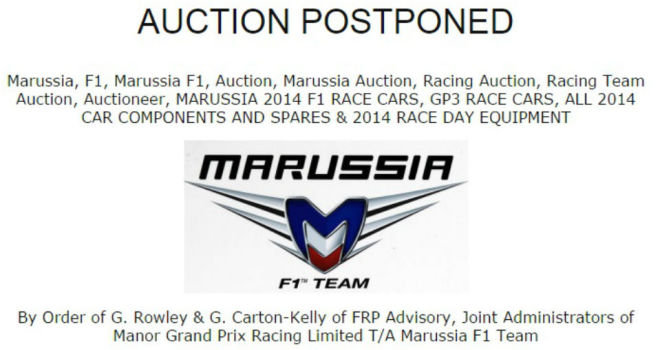 It goes without saying that any opinion on why the auction was called off is totally speculative at this stage but it does seem to suggest that perhaps the team are not as dead as we first believed. It could be investors looking to buy the team have been found or perhaps that someone has made an offer on the teams technical property that significantly pays off the debts the team has accrued in 4 years of racing.

John Booth, the head of Marussia, has been quoted as saying the team were “at a fairly advanced stage with a new investor – a credible investor”

That said it would take an almighty effort for the team to get ready for the new season. Special dispensation would be required from the FIA to use last years car which undoubtedly would require altering to conform to the new nose design implemented to rid F1 of the ugly noses of 2014. The fact that Caterham have already been given this dispensation should help the process somewhat.

In the end though most of Marussia’s debt is to their engine suppliers Ferrari and it is yet to be seen if the Scuderia would be happy to supply engines when over £16M is already owed to them.