After seemingly good news for the two beleaguered back row teams of Formula One this week saw Caterham see their assets put up for auction and Marussia have their application to run 2014 spec cars denied by the F1 Strategy group. Significantly now we have concrete proof that both teams will struggle to make it to the grid in just a few weeks time for the Australian GP.

Reports suggest that 3-4 teams blocked the move by Marussia to use last seasons car modified for the 2015 regulations with the only confirmed team to have publicly stated their vote being Force India. Bob Fernley, Force India’s deputy team principal, is quoted as saying:

They’re asking for dispensation in terms of running a 2014 car prior to switching over a 2015 car and in that should be all the details of what is going on.

The reality is that absolutely no documentation was provided whatsoever. Even the process that was used in terms of the letter that was sent in was not compliant. It should be sent by the administrators and it was sent by one of the former directors of Marussia.

So, while it’s a very emotional subject, it also has to go through compliance and due diligence and it couldn’t go through either of those.

It just happened to be that Force India was the first team to vote and once one team has voted against, it’s no longer viable.

This suggests that any other teams who voted against the move simply followed Force India’s lead. The most disappointing aspect of this is that only last year Force India were proposing to boycott races unless the finances of Formula One were changed to support smaller teams. Vijay Mallya said: 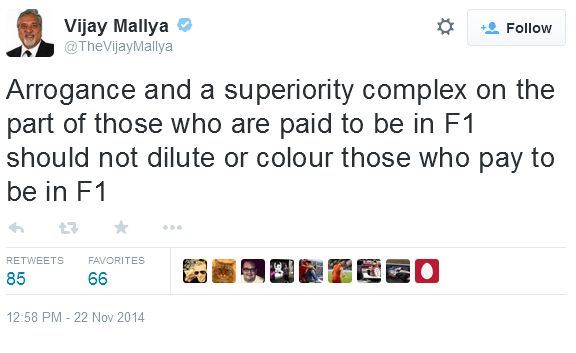 Yet this seems not to include teams who wish to pay to be in F1 and accept the deficiencies of running a previous seasons chassis to try and stay on the grid. The massive hypocrisy seems to have backfired spectacularly on the team with most comments sections on the story showing F1 fans feeling that should Force India now succumb to the same woes as Marussia and Caterham with their finances most would not shed a tear.

This is such a shame as Force India had been somewhat of a shining light as to what a “smaller team” could achieve in terms of both stability and performance and so were a well thought of underdog, a team you could happily support behind your chosen team. Now we’re left with a feeling that Force India believe themselves to be better than Marussia or that this entire line is about claiming their share of the money Marussia won last season thanks to Jules Bianchi’s heroics.

Caterham on the other hand seemed to be better off, with no real talk about administration or likelihood of the team folding as spectacularly as Marussia. They had their grid position confirmed and whilst we’d not seen any semblance of a 2015 plan being put into action there was at least the feeling of no news being good news. So it was some what of shock to see the entire teams assets up for auction in the coming weeks.

Marussia themselves had narrowly avoided the same fate just a few weeks earlier thanks to the possible investment into the team from a third party. It can only be seen as the last throws of the company when all their phsycial assets are being stripped out for sale. If there was any lingering hope for at least one of these two teams to make the grid they appear to have been snuffed out cruelly so close to the start of the season.

We are again left with the question of how F1 has managed to back itself into such a corner that teams are going bust left right and centre but are not being replaced at the same rate. It was certainly true in the past that teams would enter F1 and sometimes last a season or two before folding but there was never a shortage of teams wanting to get on the grid. The cost of F1 was not a put off and the relative rewards were greater for those entering the sport as well as there being less of a technological gap between the front of the grid and those starting out.

We can’t go back from the advances the sport has made in terms of the complexity of the cars without taking away what F1 is really all about, being the pinnacle of motorsport. The only thing we can do is making it more enticing for teams to want to join the grid, instead of expecting news teams to plow in the same amount of money as Mercedes or Ferrari from day one the sport needs to allow teams grace time to purchase tech from the top teams as well as sorting out the ridiculous financial situation which sees certain teams getting a larger share of the sport revenue.

We also need to look at who else we reward the lower teams who will not be challenging the front of the grid. Firstly we can start to reward manufacturer points from first to last. This doesn’t radically alter sport but allows the lower teams to at least fight between each other throughout a season in the same fashion as the front runners. No one is looking to follow Marussia or Caterham level teams if their entire season can depend on one lucky result. However if we can see the difference between the teams throughout the season grow and ebb from race to race then you can follow the fight just as much as 1st to 2nd.

The second would be to arrange some sort of “parachute” payment for the new teams so that for the first 2-3 seasons new teams are given an extra share of the profits of F1 to invest back into the team and cars. Similar to the way that relegated teams in football are given payments to avoid them having to sell off all their best players and effectively crippling the team this would allow the small teams to pay for aero or engineering resources over those seasons to help boost them closer to the pack without permanently giving them an advantage.

The FIA, FOM and the teams cannot continue on the path of eliminating the slower teams each season, all sport benefits from the challenge of aspiration. All teams that are promoted to the top league of their sport aspire to be the best, that often takes a long time and costs a lot of money but the sport does not penalise them for not being able to start at the same level as the top teams. F1 seems to be the only sport in which daring to dream about success is a dirty word.